Participants in the 17th Korean Media Congress are taking pictures.

Under the theme of Korean, foreign media, the rapidly changing global media environment, and the Korean media industry, some 70 people, including Korean journalists and representatives from 23 countries participated in the event. The group is a group of journalists who operate Korean language media in more than 30 countries around the world.

Our members represent the Korean people, and they are the spearhead of the Korean Network. We are making contributions to the development and prosperity of both Korean and Korean communities in the global era. 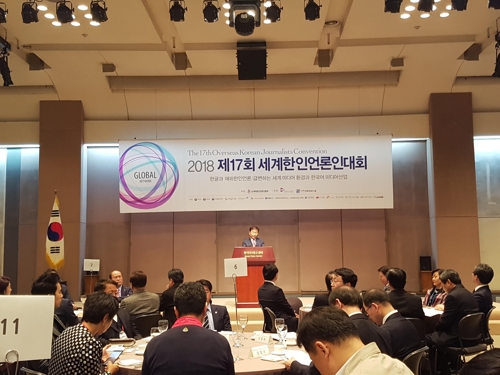 At the opening ceremony, President Jeon Yong-chang is giving his opening speech.

In a welcoming speech, Han said, I am a foreign resident and I feel like I am coming to my home country because I don't feel it is necessary to attend this meeting. It is a serious issue that has no constitutional definition of overseas Koreans.

My fellow Koreans should also pay keen attention to the debate over constitutional amendment. We can not protect your children's rights and interests at three to four years old, and we can not actively participate in developments in your country.

Prior to the opening ceremony, the group and the paper culture foundation and the World Paper Folding Union signed a mutual agreement to expand the culture of Korean paper folding and globalization on paper culture.

At the National Assembly's library's main auditorium on Friday, Korean journalists will discuss with experts about the promotion of overseas Korean media networks and establish a press school to nurture next-generation Korean journalists. He will visit the headquarters of KBS on Friday and visit Hanok Village in Jeonju, North Jeolla Province, and Songdo free economic trading zone in Incheon on Friday.

At the prime minister's official residence in Samcheong-dong on Friday, the event will be concluded after a luncheon meeting with Prime Minister Lee Nak-yeon.

The Federation of Korean Media Associations, an organization affiliated with the Ministry of Culture, Sports and Tourism, will visit the country every spring and fall from 2002 to hold international press conferences and symposium on Korean journalists worldwide. Starting this year, it plans to release a quarterly magazine titled " Korean Americans in the World, " and distribute it in Korea. 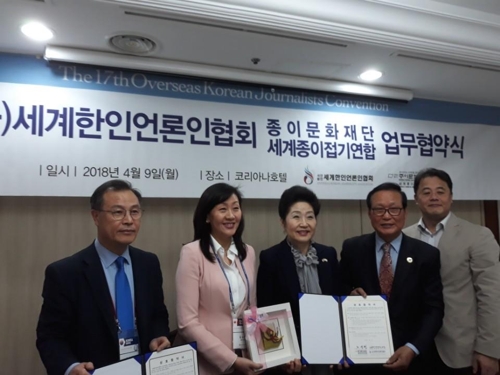 From the left is the picture of the Korean American Association of Media Associations and the Paper Culture Foundation.