The day of full unification on April 30 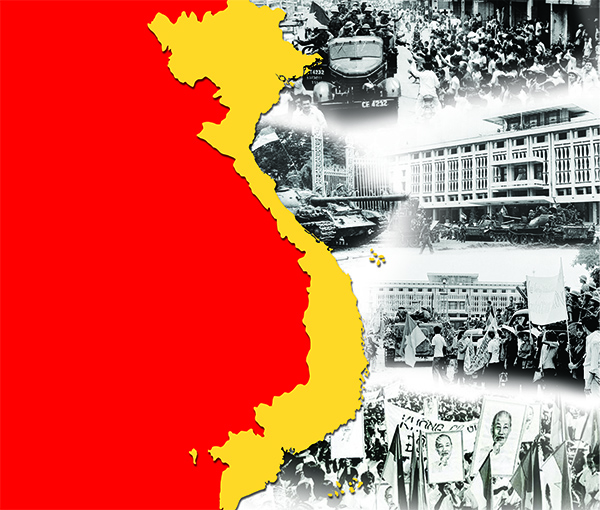 April 30 is the South Liberation Day, a national holiday in Vietnam. While many people are now enjoying the longest holiday except Labor Day and the Lunar New Year's Day, more than 40 years ago, the day was the last step toward the endless period of the Vietnam War. We believe that the sacrifice and pain of the Vietnamese soldiers and refugees who have been through the war, the Korean soldiers who should not be forgotten, is the burden of Vietnam's dynamic development and growth.
The " General Assault " of the Ho Chi Minh movement overthrew the Saigon government and achieved unification. This is the most important milestone and the most precious day in Vietnam's history, when the Vietnamese achieved national liberation and reunification by themselves. On May 1, 1975, all workers and citizens of Vietnam, including the South and the North, were free to celebrate Labor Day in a completely free country. Since then, Vietnam has remained a unified country.
However, this is not a result of itself, but of constant war and sacrifice. In 1960, the South Vietnamese National Liberation Front (NLF) began a long war with the U.S.-backed South Vietnamese government, supported by the North Vietnamese for full independence and unification.
On August 7, 1964, the United States manipulated the ' Gulf of Tonkin War ' to impose a ruthless bombing on North Vietnam, and later, South Korea, Thailand, the Philippines, Australia, New Zealand, and China entered the war. The war, which started in the first place without a justifiable cause, has become sluggish, unexpectedly, due to strong resistance from North Vietnam, causing the international community to fall into chaos and criticize the U.S., which is the main force of the war.
South Korea, meanwhile, is the second largest military force after the United States in the Vietnam War. South Korea sent more than 300,000 combat troops to Vietnam in September 1964, starting with the dispatch of non-combat agents centered around medical staff. About 16,000 young people were killed in the process, and even those who returned alive are suffering from the aftermath of the horrible and painful defoliant.
In April 1975, the National Front for the Liberation of South Vietnam planned to attack the South before the rainy season began. However, South Vietnam, which boasts 1.1 million troops armed with the latest U.S. military weapons and the world's fourth-largest air force, was not easy.
However, military discipline, discipline and corruption in South Vietnam's leadership that had collapsed from within made the power gap colorless, and on April 27, all Americans were asked to withdraw from the U.S. radio station.
On April 29, a helicopter door with Americans withdrawing from the roof of the U.S. Embassy closed. Hundreds of Vietnamese cry at the rising door of the transport helicopter to ride on the helicopter. Outside the fence, the Vietnamese struggled to get inside anyway, and the Southern Marines forced the guards to shake clubs and throw tear gas to stop them. This was the last appearance of a 30-year alliance between the United States and South Vietnam. And finally, at 3:45 a.m. on April 30, U.S. Ambassador Martin entered the American flag and left the embassy building by helicopter. It was only two and a half hours before the North Vietnamese tank brigade, which was hung on a pre-free plane, crossed a bridge outside Saigon and took over the palace.
On April 30, 1975, the day independence how do you expect me to the palace to North Vietnamese radio announced its unconditional surrender in an hour ago ‘Duong Van Minh’ South Vietnamese president of a serene.Through voice is the media have begun to trickle out. As the commander of the Vietnam Army, I command the entire army to stop and stop firing at its present location.… "
After 117 years since the French occupation of Da Nang by force in 1858, the Vietnamese overcame the intervention of France and the U.S. and finally achieve unification by themselves. This marked the end of the 30-year long Vietnam War. It was the last victory of the Vietnamese revolutionaries and the people in a long and painful armed struggle with powerful imperial states.
The South Liberation Army, which has fought with a handful of salt and a handful of poison and a handful of poison like a mole, they cut the tire and tied it with a string of boots. . And instead of the old name Saigon, Ho Chi Minh will be named after the hero who led the Vietnam War.
The Vietnam War left 110,000 soldiers killed, 499,000 injured, and 415,000 civilians dead. The Hanoi government also officially announced in 1975 that 1.1 million government troops and the Liberation Army were killed and 600,000 were injured. The price of liberation was immense.
Therefore, the war in Vietnam should never be forgotten in our modern history. The memory of those small Vietnamese soldiers, who fought with nothing for so long to protect themselves from the great powers of the empire, and the memory of the young men who are still bleeding, is still a sacrifice.