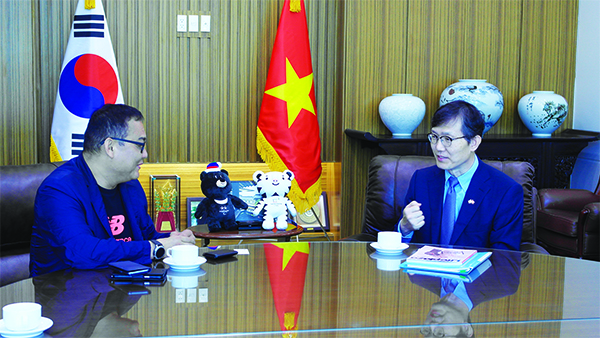 Welcome to the position of the Korean consul general. First of all, how do you feel about your appointment?
Moon Jae-in, president and apec Summit held in Da Nang last November and 3.22 (neck) - 24 (toe) between ‘Trần die bust’ that his country and a state visit to Vietnam.Hold a summit with and agreed to ‘comprehensive strategic partnership’ agreement on bilateral relations. I am pleased to be appointed as consul general at a time when the Korea-Vietnam relationship is getting closer. In particular, Ho Chi Minh City and its neighboring areas are home to about 100,000 Koreans, and we feel more responsible as it is a key economic development hub in Vietnam, with more than 3,000 Korean companies advancing into the area. During my tenure as consul general, I will do my best to protect the interests of Korean residents and businesses.

What new experience did you have while living in Ho Chi Minh City for about two months? How have you changed the environment, the weather, and so on compared to your previous posts?
I have been a diplomat for nearly 30 years and worked in many countries such as Switzerland, Ireland, France and European countries, Philippines and Cameroon, my former acquaintance. Whenever I arrived at my new post, I always started working with excitement and expectations about the country's unique culture and environment.
Although working in Vietnam is new and strange in many ways, I have seen the Confucian lifestyle, values, emotions and the home-to-work sense of affinity and homogeneity of the working class. The hot weather of Ho Chi Minh City is not difficult to adapt to and experience in the Philippines and Cameroon. Instead, I am satisfied with the unique Vietnamese food such as rice noodles.

While you have been a diplomat, I would like to ask you about a brief introduction to your work and work achievements, and your belief as a consul general.
I was many matters concerning protocol and diplomatic negotiations activities while working overseas missions, but first of all, French Southern and an official visit to the work our president in France.When held the G20 summit in Cannes, France, the city and protocol assistance and foreign authorities and event schedule, meeting agenda, working in close collaboration with the whole event was.A successful new memory of how to help. I also cherish the memory of being awarded the Grand Arficier de l ' Ordre National de Valeur ' by the government of Cameroon at the end of the term as ambassador to the state.
I have felt that diplomats should do their best to promote national interests and protect Korean rights based on their high moral and integrity. Also, I think it is the calling of overseas missions to communicate with our compatriots, businesses and local residents with open mind and to consider and support various difficulties together.

I know that you were an ambassador in Cameroon before becoming Korean consul general. Was there any activity related to Korean residents in Cameroon, and is there any activity that can be linked to Korean residents in Ho Chi Minh?
There are very few Koreans (between 100 and 120) in Cameroon, but we have continued to meet with them through regular meetings and events of the Ambassador's residence (New Year's Day, New Year's Day, etc.). In addition, there are many events in the world that invite Korean traditional performers to participate in the K-POP event.
Cameroon through various cultural and public diplomacy activities.
Introduce our culture to the people,
Furthermore, we tried to make sure that Korean residents live with pride as Koreans.
Since about 100,000 Koreans live in the southern part of Vietnam including Ho Chi Minh, we will further enhance the consular activities for each region and support the voluntary activities of Korean organizations.
I am writing about the project that you are planning to take during the appointment of the consul general in relation to the situation which is difficult for the growing number of Koreans and the growing Korean community.
Despite the short period of 25 years of diplomatic ties, the number of ethnic Koreans including Ho Chi Minh City has been increasing dramatically in all areas, including politics, economy and culture. The consulate has established a system of organic cooperation with the Vietnamese authorities, including the security and police, in order to promptly respond to accidents and incidents. In particular, we have been steadily expanding our business with the security authorities in Ho Chi Minh City to install CCTVs in the areas facing Koreans. Further, we are actively considering increasing the number of consultancies in the consulate to better cope with the growing number of cases and accidents.

I know that you first visited the Korea International School in Ho Chi Minh City. There are several issues in the Korean community, but the most urgent issue that many people agree on is the solution of education for their children. Do you have any plans for this part, and how do you plan to proceed?
The consulate has worked closely with Ho Chi Minh Korea International School to help ensure stable school operations in the future, with the Vietnamese government exempted them from all rent. Ho Chi Minh is the largest international school in the world and the demand for education of Korean children in Korea is expected to increase in the future, but it has been difficult to accommodate students due to lack of classrooms. While the number of students has been continuously increasing, for example, through teacher additions, further expansion has reached an extremely high level. As a result, the consulate is considering building a second campus in the mid - to long-term, and is considering a variety of land and budget acquisition plans along with Ho Chi Minh Korea International School.

Please say a word of blessing to the Korean people who will be joining us.
Since the establishment of diplomatic ties in 1992, Korea and Vietnam have made remarkable progress in their relationship, which is considered impossible in 25 years. Last year, the trade volume between the two countries was about 64 billion, and Vietnam became our fourth largest trading partner, and by 2020, it is expected to emerge as the second-largest trading partner with 100 billion won in trade. Also, Vietnam is a key member of the Korean government's " new South Korea policy, " and the trend of cooperation based on coexistence and reciprocity is expected to continue for some time to come. I think the remarkable development between the two countries was made possible by the efforts and strength of every Korean citizen who made his way to Vietnam. I hope all of you will continue to love Korea, respect Vietnam, and strive for the future of your lives.