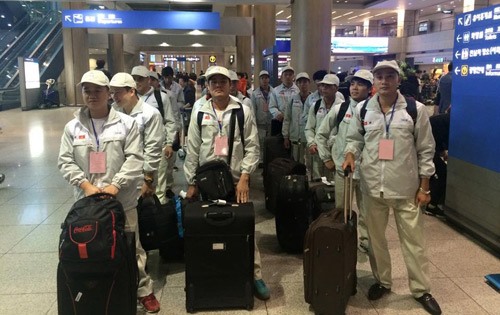 The young man is working hard to support his family, but he was studying Korean, dreaming of being dispatched to Korea for the sake of the current changes and better life for his family.
But his dream collapsed after earlier this month, when the Ministry of Labor and the Ministry of Innovation and Social Affairs announced that his county, H'lscilla, was part of an area that did not send workers to South Korea.

The Ministry of Innovation and Social Affairs was due to the regulation that if residents in 49 regions of 12 cities and provinces do not return home after the contract, they will stop the Korean labor program. It was also because of the notification that it would include regions with more than 60 employees illegally staying in Korea.

" I think the decision is unreasonable and it now costs more than US$ 888 to study Korean for two years, " he said.
He suggested a review of the dismantling of these regulations by competent agencies.

Mr. Y, who lives in El Escilla, just like Thong, dreamed of serving in Korea, but is now frustrated.

" If I can not pass the Korean test again this year, I will return to my hometown working as a clothing worker in the Vietnamese industrial region, " she told the newspaper.

" This year, there were 49 regions that were unable to send workers to Korea, but the figure is still high and thousands of workers are impossible, " the Education Ministry said in a recent report.

" Unless the number and percentage of illegal residents in these regions have decreased by the end of 2018, the non-tarching zone will remain in Korea in 2019, " said the Labor Ministry deputy director.

Currently, the Foreign Labor Management Department has taken a number of actions for workers who have not returned to Korea, and has decided to make sure that they can return home after the contract expires.

Currently, the percentage of workers who have not returned to Vietnam from Korea has fallen from 50 percent in 2000 to 34 percent now, and has continued to sign an MOU with Korea.