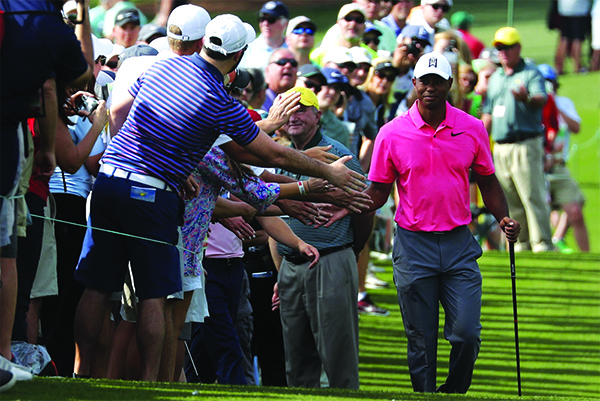 The reason why the Masters practice round is attracting audiences is because of the charm of Augusta and Masters.
There is no better chance than a practice round to take a calm tour of Augusta, which is hard to overcome due to its closed operations.
The opportunity to watch players ' every move on TV is also a luxury at the Masters practice round.
In addition, during the Masters practice round, it is easy to see legendary former stars wandering the course. Once a player wins the Masters, he or she will be given the right to participate for life as long as he or she wants, but even seniors who do not compete will come to take the course during the training round.
Another reason for the popularity of the Masters practice round is souvenirs. The Masters souvenir is so popular that it sells over 50 billion won (50 million dollars) each time it is held.
There is plenty of stock in souvenir shops between October and Wednesday when the practice round is held. On Friday and Friday, when the first and second rounds are being held, they are already showing signs of running out, and it is difficult to find popular items in the third and fourth rounds.
The Masters are not the only ones who sell tickets and run souvenir shops on the PGA tour.
Most competitions open their practice rounds to fans. It is not uncommon for fans to take pictures and get autographs while following the players on the training tour or watching the players practice at the practice hall or exercise green.
Many fans prefer to watch the exercise day because they are not generous to their fans as they are to their fans because control is strengthened and their nerves get on edge when the game starts.
Players also use the day as an opportunity to freely respond to requests for autographs or photos from fans.
However, this is not the case at Korean professional golf tournaments.
Usually, they rent a golf course and give it to the players on Tuesday or Wednesday, but they do not open it to the audience.
On the day of practice, only officials, including players, caddies and coaches, are allowed to take the course. On the day of practice, golf courses are often boring.
Since 2016, the Korean LPGA Tour Hite Jinro Championship has opened its course to fans on the day of practice.
On the day of practice, only 50 fans came to see their favorite players. There was not much response. It was a weekday, and the limit was that the stadium was remote outside of Gyeonggi Province.
However, the opening of the course to the audience even on the day of practice should not be abandoned. Rather, more competitions should open the day for practice.
Organizers may find it annoying to open the course to fans who do not come even on the day of competition and prepare them for practice.
Players may not want to be bothered by fans until practice day.
However, the Masters did not become the most popular golf tournament in the world from the start. Also, the day of the Masters practice was not that many spectators gathered.
Although the Masters are notorious for being the world's most closed management, the reality is that they are fully concerned for fans.
[Yonhap News Agency : Kwon Hoon.]