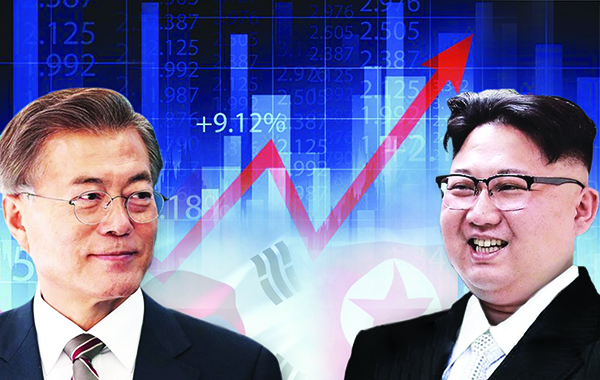 The historic inter-Korean summit has come a few days ahead. It is doubtful whether the same leader of the same era might be able to make the North Korean peninsula and the international community a crisis through threats, armed protests and six nuclear tests. In other words, the two leaders will continue to hold inter-Korean summit meetings in April and between May and June. In conclusion, the two summits appear to be going at the pace of North Korea, and are seen as a result of strong sanctions by the international community, and the internal confidence in the completion of nuclear arms is the point of urgency. Although peace seems to come to the Korean Peninsula right away, it is also common to believe that it does not appear to be the case if one understands the effects of learning over the past decades, the outcome of the summit, and the nature of the North Korean regime. The market's expectations for the inter-Korean summit do not look too high, considering the reaction of the South Korean financial market in the wake of negative developments in North Korea over the past few years. The so-called " Korea discount " and " geopolitical risk " of Korean products, which are not properly evaluated in the international financial market, are also not expected to improve drastically. The key is the North Korea-U.S. summit and the complete denuclearization. The so-called CVID [Complete, Verifiable, and Irreversible Dismantlement] is the U.S. requirement for complete, verifiable and irreversible denuclearization. But all of them knew as Trump as president and Chairman Kim Jong Un are becoming unpredictable North Korea leaders the United States, d to predict how the results of the summit between the two countries.It's not easy. Although the goal is to achieve a lasting peaceful reunification of the Korean Peninsula, it is not practically easy in the short term considering international dynamics.

This is an overview of the financial market before and after the summit. The stock market seems to have a long way to go on the basis of the KOSPI, and for the time being, the KOSDAQ 1,000. The anti-business sentiment centered on large corporations and the slow restructuring of shipbuilding, shipping, automobiles and steel industries are also holding back the stock market. It is natural logic, but corporate performance should be supported rather than political atmosphere. The bond market is also in a bad shape due to concerns over a steep rate increase of more than 3 percent in the last 10 years. The gap in interest rates between Korea and the U.S. has increased to 1.50 percent in Korea and 1.75 percent in the U.S. The foreign exchange market is also unpredictable due to the United States ' strengthened protectionism and designation of the exchange rate regulator. The strong won against the weak global dollar is the current trend. The exchange rate is expected to be between 1,020 won and 1,100 won per dollar by the end of the year. The raw material product market appears to be strengthening the overall momentum of the market due to soaring international oil prices, which are backed by higher U.S. interest rates. The price of gold is also expected to rise. The real estate market is suffering from a slump in trade as the government's regulations are strengthened and taxation and loan regulations work together. The upward trend of property prices centered on popular areas in central Seoul is expected to be further maintained by a lot of liquidity and inflation expectations. Overall, the government should not be nervous about the event political event, but try to respond to the situation by watching how things go.One of the investment patterns is to simplify trading factors, look at them objectively, and wait patiently as market conditions become more complex. This is why players in the international financial market are so valuable.

I have kept my promise with Vietnam. A step toward shared growth Registering Korean Trademarks in Vietnam
List Write