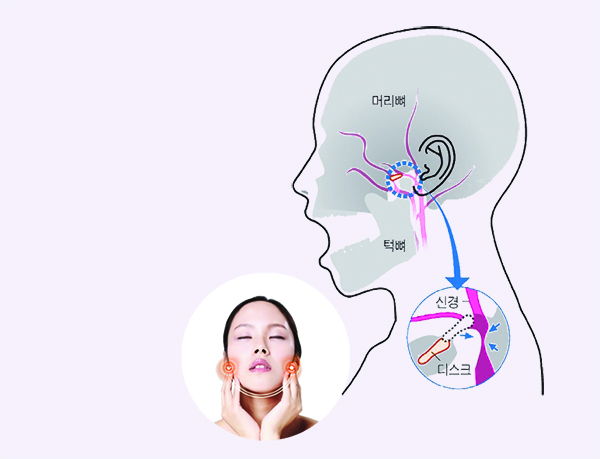 Temporo-mandibular joint disorder syndrome
There are times when a person's mouth fails to open abruptly or when he or she does not open up after yawning. This is an acute jaw joint disassembling. Some people open their mouths and sing from the front of their ears when they are closed. If it is too bad, even the next person can be heard. Some people suffer from pain in the front of their ears. All of these symptoms are called jaw joint syndrome.
Jaw joint disorder is one of the modern diseases in which 30 percent of the population suffers statistically. Jaw joint disorder is closely related to stress such as stress, overwork, and tension in life.
There are many causes, but the most common cause is perversion. If your teeth do not engage properly due to uneven alignment, you can suffer from jaw joint problems. Thus, a corrective treatment is necessary to treat jaw joint problems. A corrective treatment that does not take into account the impact on the jaw joint can only increase the risk of jaw joint problems. It is easy to develop a disease by letting it sit for a long time because it does not know the connection between the jaw joint and the jaw joint.
If you have jaw joint problems, you will have muscle pain around your jaw joint as well as an unknown migraine. This headache is a kind of pain that occurs when muscles around the jaw joint are strained.
In severe cases, the symptoms of jaw joint problems include a sore throat and tinnitus.
These symptoms disappear with a remedial treatment.
Cause of jaw joint disorder
There are direct and indirect causes of jaw joint problems. Direct causes, such as trauma or inflammation, have characteristics that cause damage to the jaw joint itself or lesions.
In most cases, however, other tissue systems associated with jaw joints become a source of development, causing problems in jaw joints. The leading factor in production is teeth.
The teeth and jaw joints form a system of chewing food. Therefore, they are closely related to each other and the problem of the teeth affects the jaw joint.
Symptoms of jaw joint problems are an inconvenience. You can get along if you wait. However, considering the quality of life, it is a big inconvenience. In particular, there is a report in the academic circle that the risk of jaw joint problems in women being affected by female holmon is very high.
If a person with multiple arthritic arthritis has a risk factor caused by teeth, the jaw joint can be absorbed and the teeth can not engage properly.

● Interperation by inclusion
In cases of irregular perlock, the teeth of the stomach and the lower teeth can collide with each other. There is no clear symptom of occlusion interference as in other diseases. Even dentists can not be found with the naked eye.
When the teeth do not engage evenly in the front and back teeth, the first contact point becomes the lirepoint, dislocating the joints and stressing the various creative muscles connected to the joints.
Starting with muscle strain (muscle aggregation), muscle / nerve syndrome causes muscle pain (migraine, shoulder pain, and back pain) in other muscles linked to the muscle root.

● Clenching teeth
Stress, overwork, and tension can cause jaw joint problems. When they are nervous about this, most people are likely to keep their teeth together secretly. This type of tension that holds your teeth tightly is called clenching, which gets worse when you sleep. This may cause grinding of teeth.
Clenching can have a devastating effect on the jaw joint if there is interference in the occlusion. Clenching causes headaches to worsen when you are stressed or overworking.

● Trauma from Accident
Traffic accidents and prices can damage jaw joints and cause jaw joint problems. As cars become a necessity of daily life and the frequency of car accidents increases, the number of jaw joint problems associated with car accidents also increases.
In particular, when the head is rolled back in the event of a collision, the tip of the jaw strikes the chest again, causing damage to the jaw joint.
In most car accidents, treatment will be concentrated on areas of the accident that look large with the eyes. The damage to the jaw joint is not visible, so the damage is ignored. However, when the memory of an accident is gone after several years, headaches, pain in the back of the neck, and pain in the nose are often reported, and the symptoms are often very severe. Damage to the jaw joint, which was caused by traffic accidents, is belatedly caused by incorrect pain.
Even if such symptoms were diagnosed as a syndrome caused by damage caused by traffic accidents, one can not appeal to them because all compensation measures have already been completed.
In advanced countries, whiplash has always been considered as part of insurance for traffic accidents.

Sitting ' You ... ' ' Get up and move now. ' Prepare for the summit and do your best with extraordinary resolution.
List Write