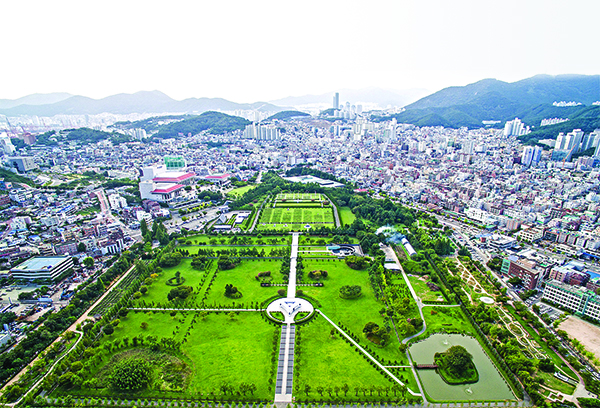 ◇ To be nominated for the World Heritage listing
The United Nations Command chose the current location as the site of the U.N. Cemetery in October 1950 when the Chinese Communist Army joined the war for a prolonged period of time and the number of UN soldiers killed in the war increased. The site selection was influenced by the fact that it is located near the port of Busan, has fewer residents and is unlikely to be developed as a city for some time.
The United Nations Command completed the cemetery on April 5, 1951. The remains of war dead who were buried in Gaesong, Incheon, Daegu, Daejeon, Milyang and Masan began to be buried. Between 1951 and 1954, the remains of U.N. soldiers buried were 11,000 in 21 countries.
The National Assembly resolved on November 7, 1955 to permanently donate the site to the United Nations and designate it as a shrine in return for the sacrifices of UN forces. The U.N. adopted the Resolution 977 (X) at the U.N. General Assembly on December 15 that year.
The United Nations and the Korean government celebrated the sacrifice of U.N. soldiers on November 6, 1959 and arranged a U.N. Memorial Agreement between the establishment and maintenance of a cemetery in the United Nations so that the dignity of the cemetery would not be compromised by the use of nearby land.
The city of Busan has created and protected arboretum, sculpture park, museum and peace park around the site to preserve the dignity of the U.N. cemetery. The site of the U.N. cemetery, which had only one tree on its back, has become a symbol of international peace.
Twenty-one countries around the world join in a one-two minute silent tribute to the United Nations Memorial Park in Busan on November 11 at 11:00 a.m. Korean time.
Turnsworth Busan began in 2007 when Canadian veteran Courtney proposed a silent tribute to the United Nations Memorial Park in Busan, the only U.N. cemetery in the world.
The event was upgraded to the hands of the government in 2008, and the number of participants expanded to 21 in 2014, making it an international memorial event.
" The U.N. Memorial Park is the key facility among the eight (World Heritage) provisional sites, " said Kim Hyung-chan, director of Creative City in Busan.

◇ War in the name of 60 UN troops and U.N. Cemetery
The Korean War was the first war that 60 UN member states participated in and supported in the name of UN forces. The United Nations Cemetery is where the remains of the heroes who fought in the war fell asleep.
The United Nations recognizes the U.N. cemetery as the only memorial facility for the U.N., where war veterans who sacrificed to protect international peace have fallen asleep. Currently, the U.N.'s cemetery management body is an 11-nation UN Memorial Park International Committee.
In Thailand, between 700 and 1,000 soldiers who died during World War II were sleeping, but they are not administered by the United Nations.
The composition of the U.N. cemetery is quite different from that of the national cemetery in Korea. There are monuments in the cemetery, including the main station where the remains are buried, the symbol zone of war and United Nations flags, the United Nations Memorial Tower, the memorial hall for war dead, and the memorial hall and the main gate.
President, national independence, or tomb according to the rank of soldier life, such as identity, location and scale that will alter the cemetery and the other hand, jumyoyeok are each the size and configuration is the same. Our national cemetery, which has different graves, may be aligned with the spirit of the Constitution that all citizens are equal before the law. However, the U.N. cemetery is all equal.
The copper plate, which is slightly larger than a piece of A4, contains information on the nationality, name, membership, date of birth, and time of death of the deceased, and there is only room for a flower next to it. Visitors to the main station or symbol area may ask, ' Are you special or have you been to war? '
There is even a 110-meter-long water path named after Master Downt from Australia, who is the youngest person to die in the U.N. Army.
" Most of the war veterans who died in the war are buried in the order they arrived at the U.N. cemetery, " said Park Eun-jeong, director of the international affairs committee at the U.N. Memorial Park.

◇ Final decision to register as Busan World Heritage Site in 2025
The U.N. cemetery was not included in the provisional list of World Heritage sites in Busan.
United Nations Memorial Cemetery in Korea managing the UN Memorial Cemetery in Busan City has the international meeting to obtain the consent of the Management Committee meeting United Nations after the delay, we waited, but the results excluding the cemetery.14 chose abortion, such as temporary president's residence, the capital its proposal for Cultural Heritage Administration at a preliminary list of December 2016.
Contrary to expectations, the Cultural Heritage Administration decided to supplement the logic of selecting a continuous heritage in its first deliberation, and the listing of the temporary listing was postponed.
After the first deliberation, the Busan city government had the consent of the U.N. Memorial Park International Management Committee, and selected eight sites of public cooperation and international cooperation to draw the decision to list them as a conditional provisional list.
The Busan Metropolitan Government stressed that for 1,233 days out of 1,129 days during the Korean War, Busan was a place of political, diplomatic, administrative, educational, economic and cultural concentration and the spirit of the United Nations.
The U.N. cemetery is like the Hwarongnyong Pavilion on eight lists, as the Korean Seowon and Seoul City Wall have failed to register as World Heritage sites.
" The only structure left among the structures of the Korean War is the U.N. Memorial Park, " said Kim Han-keun, head of the Institute for Modern History.
" Some 60 years ago, the U.N. Memorial Park was the center of the city.
The final decision on the World Heritage listing will be made at the UNESCO meeting in 2025.