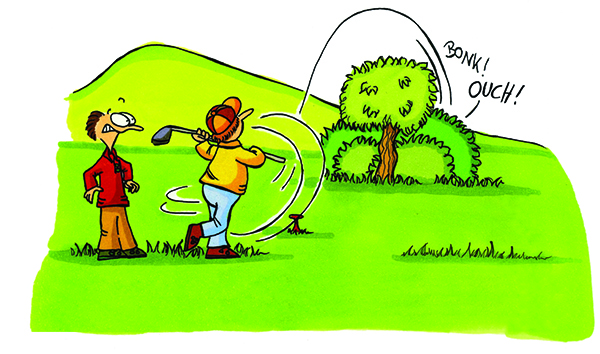 However, the rule does not work in South Korea. Instead, they do not return to where they originally hit them. He gets a two-butter hit at a specially prepared place called " OBT T. " There are no disadvantages to distance, but they only add disadvantages to the number of times a player has played.
It is the so-called " Korean rule. " Of course, Korean rules do not apply to professional games and official competitions.
The USGA and R&As have decided to follow the Korean rules when the U.S. .s comes into being next year. When the team gets an OBE, it does not have to return to the position it had originally hit. Instead, they get two beltars.
The fact that it does not apply to " elite " games including professional competitions also resembles the Korean rule. If there is anything different from the Korean rule, it does not set " OBT T " separately. Drop and hit near the spot where the ball goes to the OB area. The same is true of parallel hazards. But hazard is different only from one pair.
When USGA and R&B announced their plans to revise the rules, rumors spread on the Internet that the Korean rule has become an international rule.
There was even a plausible news report that 40 percent of the opinions on revising rules filed for USGA and R&B came from Korea, which is the result of the USGA and R&As ' acceptance.
Upon confirming this to an R&D official, it has been found to be a false rumor. It is true that USGA and R&B received opinions from golfers from around the world to revise rules. However, among the comments received, it was " insignificant " that a Korean golfer sent. Furthermore, it is not just Korea's exclusive possession to hit the ball after receiving a two-butter prize without returning to its original position when the company enters the OBE.
In neighboring countries, Japan does not have a separate " OBT T, " and many do so in the same way as the rules that they have decided to revise. In the U.S., there are several golf courses that are bundled with red piles that indicate a " hazard " zone on both sides of the fairways. This is a trick similar to Korea's " OBT Tea. "
So, what is the meaning of USGA and R&B? They are struggling to revive the popularity of golf.
In the United States and Europe, golf has long been popular for public leisure. However, the number of golf players continues to decline. There are many reasons, but many people are reluctant to play golf because it takes a long time and the rules are complicated and difficult.
The direction of the revision of rules pursued by USGA and R&As is set to " enjoy golf easily " along with " fast play. "
In fact, it is not an ordinary job to return to the position that the team played when it was in the OBE. In the United States and Europe, the waste of time is enormous. It takes a lot of energy. It's like hell to follow the rules. Feel guilty about not following the rules
The recent revision of the rules has eased such worries. Gyeonggi Province is also moving swiftly, and it is less difficult for the body and mind. In fact, the revised rules, which were announced with two bults at OBE, are also intended to make golf easier and easier to enjoy.
He decided to consider what he did at shoulder level as a knee height when he drops, or what he called a " two-touch " stroke as a single stroke.
The USGA and R&A had earlier announced that they would allow putting with the flagpole on it and would not give Bulta the ball even if the ball accidentally moves in green. It will even allow a cap on the number of hits. The so-called " onion disorder " is not uncommon.
The move should be seen as a pledge not to bully golfers with the " troublesome golf rules. " It is also seen as a sign of breaking out of the " gravitalism, " which has apparently been absorbed in golf.
However, although many of the revised golf rules were everyday at Korean golf courses, considering whether it was for the sake of golfers ' convenience, it is rather tempting.
Golf course management players, who have forced " OB=2 Bulta, " which is not included in the golf rules, often ignore golfers ' convenience through various internal rules. Few golf courses are free to walk around and must be accompanied by a caddie.
Still, the fact that most Korean golf courses do not allow people to wear shorts in the hot summer makes the USGA and R&A, which are throwing away hundreds of years of tradition to enhance the convenience of golf.
Would it be too much of a concern if the USGA and R&As are worried about making rules on how to " not have to wear long pants " or " don't have to ride a power cart " in their golf rules?
Yonhap News Agency : Kwon Hoon