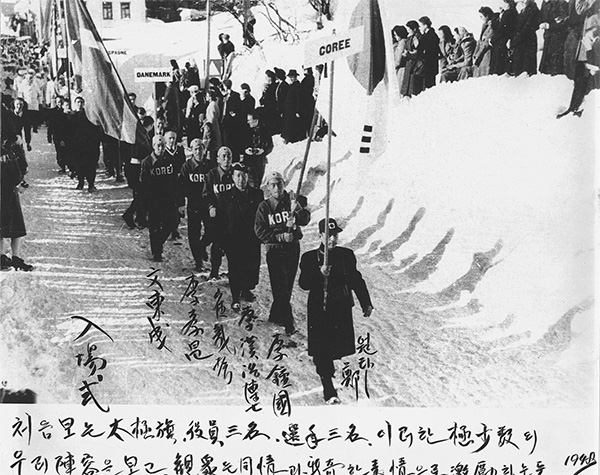 Korea, which achieved independence in 1945, dispatched Lee Hyo-chang, Moon Dong-sung, and Lee Jong-kook, head of the speed skating team, to let the world know the name of Korea. The competition, which attracted more than 600 athletes from 28 countries, was held 12 years after the World War II and the 1940 and 1944 Olympics failed. At the opening ceremony on January 30, the Korean squad entered the stadium proudly with a sign and the Korean national flag marked " COREE. " Choi Yong-jin proudly took part in the event for the first time since the 5th Winter Olympics, saying, " The much-enthusiastic Korean flag of the White House, the Mt. However, Lee Hyo-chang, who is expected to become the most promising player, had an upset stomach, and Moon Dong-sung was not included in the medal list.
It was during the London Games on July 29 to August 14, 1948 that a South Korean athlete won an Olympic medal and brought the national flag to the podium for the first time. Even before the establishment of the government at that time, Korea had been marked as the representative team of the Joseon Olympics in the Pennant Triangle. More than 4,000 athletes from 59 countries participated in the Olympics. The whole country was not invited. Despite the difficult economic conditions, Korea dispatched 50 players and 17 executives in seven sports - soccer, boxing, weightlifting, wrestling, cycling and men's basketball. For the first time, 1.4 million lottery tickets worth one hundred won (1,000,000 U.S. dollars) were issued to cover the cost of participation, and ethnic Koreans in Japan also donated money. Unlike in the winter, the people also cheered. On June 21, the team marched in front of the YMCA in Jongno 2, Seoul, and started a long march at Seoul Station.
No news of the medal was heard until the middle of the competition. Park Bong-sik, the only female basketball player in Korea, scored the lowest grade in the two-member class, while the men's basketball ranked eighth. Wrestling also lost all four weight classes for the second day, and soccer won its first game with a score of 5-3 over Mexico, but was eliminated after a 12-0 loss to Sweden in the second round. Even the expected marathon did not qualify for the prize. A good news came from the first medal on August 10. The main character was Kim Sung-jip, who was later considered a living witness to the Korean Olympic Games. He won a bronze medal in weightlifting, marking the first Olympic medalist of the Korean national team. Two days later, he won a bronze medal in boxing flyweight, raising the national flag for the second time. Korea ranked 32nd out of 59 countries in the medal standings.
Forty years later, South Korea hosted the Olympics in Seoul. Asia, Africa and South America followed Japan. Since London, although the Korean squad has displayed brilliant performances in previous Olympics, hosting the Olympics has been a different level from participating in the Olympics or winning prizes. It was an extraordinary and miraculous event that the IOC held a general meeting in Badenbarden, Germany on September 30, 1981, beating Nagoya of Japan to host the Olympics. Since then, it has been unclear whether the tournament will be held as there have been many variables. Many foreigners who only remember Korea as a " divided nation " or " anti-government demonstration " were not suspicious until the end, and the people themselves were worried that they could do well.
Concerns inside and outside the country were groundless. During the 1976 Montreal Games, 26 African countries participated in the African Games, 67 Western countries did not participate in the 1980 Moscow Olympics, and 11 communist countries did not participate in the 1984 Olympics, but the Seoul Olympics attracted 13,600 athletes from 160 countries. Except for some of the trial cases and Ben Johnson's drug use scandal in the 100 meter race, the team was well organized and recorded well. A foreign media outlet praised the event as a combination of German accuracy, American entrepreneurship and Japanese kindness. The modernized image of Seoul and the proud look of Koreans were also introduced on the camera of journalists from each country, allowing people around the world to see Korea again. Ethnic Koreans in the communist bloc, including the Soviet Union and China, who lived in isolation after Korea's liberation from Japanese colonial rule, were also surprised to see another country on TV.
There was also a shadow created in the process of showing the splendid and clean Seoul. They removed street vendors, drove out homeless people, and removed shanty towns. Restaurants in dog meat soup also suffered. Some were opposed to holding the Olympics, saying it was part of a policy to democratize the nation. However, with the date approaching, most of the people gathered together to make the Olympics a success. June Struggle, a year ago, president by people's power through the direct election of the democratization of pride and win also made a contribution. Overseas Koreans also made efforts to help their motherland. In particular, ethnic Koreans in Japan raised over 50 billion won (50 million U.S. dollars) in donations, including gymnastics, swimming and tennis stadiums at Olympic Park, Misari Stadium, Olympic Center, and a flush toilet for famous destinations nationwide.
The Pyeongchang Winter Olympics is expected to be a historic turning point for Korea. If one remembers that he achieved the miracle of the Seoul Olympics without any experience or system 30 years ago, he is a cultural powerhouse who can not lead the IT industry and can not attract young people around the world with the Korean Wave. In particular, just as Koreans who took the Seoul Olympics a year after gaining democratization due to the June protests, Koreans who have achieved peaceful regime change through the candlelight protests are full of pride and confidence. If all Koreans are united as they were 30 years ago, this year's Pyeongchang Winter Olympics will be more successful than any other Olympics ever.