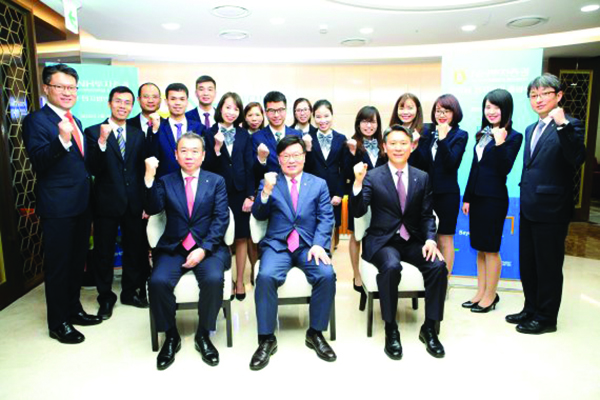 NH Investment Securities made its debut in the Vietnamese market by acquiring 49 percent of CBV securities in 2009, but it is only starting at the beginning. He explained that he could not show his wings due to his disagreement with his partner. As the ban on foreign investors from holding more than 49 percent stake was lifted in 2015, the company purchased all remaining shares (51 percent) in January this year. Having officially launched its Vietnamese subsidiary on May 9, it is racing to prepare for the project in earnest.

■ Take over 100 % stake and get ready for business
NH Investment & Securities ` Vietnamese subsidiary has increased its capital by 30 billion won with the capital increase. The government has secured resources to improve infrastructure and expand local sales. Vietnam's securities industry ranks in the top 20 in terms of capital. " We are ready for guns and live ammunition to start combat right away, " said Moon Yeong-tae, president of Vietnam Corporation.
He added, " We are hiring fifteen or five people, including sales and research staff, from this year, but it is not easy to find one that suits our expectations. " I don't expect to make a big profit right away. This year, it is focusing on exploring the market and investing in computer systems.
Initially, it will push to sell and provide trust to build a stable retail business, and gradually use the privatization enterprise (IPO) of a Vietnamese state-run company through the Corporate Capital Investment (PI). That is why Moon, who was in charge of the mergers and acquisitions (M&A), the market of stock issuance (ECM), and investment banking (investment financing), became the head of the corporation.
" We will take a cautious approach to the equity loan rather than simply following the interest rate, " said Moon. It is necessary to determine the risk to individual companies, such as which stocks to allow and how to monitor credit. We need to know the financial statements and secure good analysts to do this, he stressed.

■ pursue influential elite securities firms
Chairman Moon is not only interested in figures and sizes but also a leading securities company in Vietnam. He wants to play a role in spreading the experiences and know-how of NH Investment Securities to the Vietnamese market. We think it is more important to grow along with the development of the local market than with short-term profit goals, said Kim Won-kyu, president of NH Investment Securities.
Our long-term goal is to become a model for local financial institutions, said Moon. " Vietnam will also be the first state securities company the Vietnamese company visits when issuing Yankee bonds overseas. "
He is determined to make profits in earnest starting next year. We will do everything our rivals do, but we will double or triple what they do, said Moon. " I think it is necessary to focus on VIP customers for now.
It is true that there is nothing to boast about now, but it is full of self-confidence as it has the nation's highest level of experience and know-how. " Vietnam is no less important than China, " said Moon.