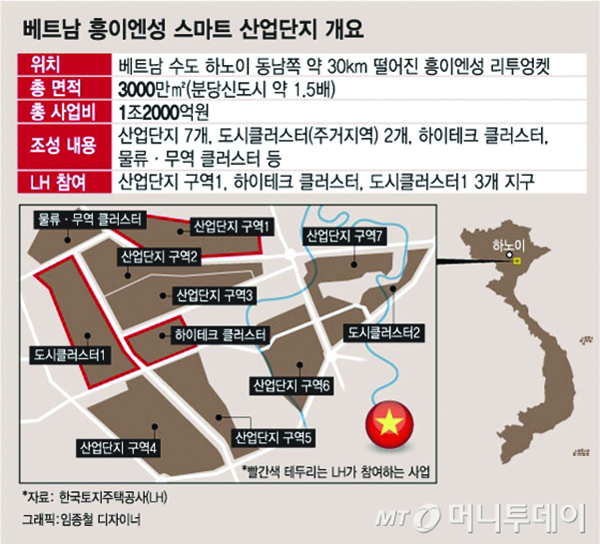 The Korea Land and Housing Corporation (LH) is set to launch a 1.2 trillion won project to create a smart industrial complex in Vietnam. The plan is to establish a joint venture with Vietnamese and Korean companies to build a Korean smart city.
According to the related industry on Friday, the LH signed an agreement with the TDH Ecoland Urban Development Investment Corporation (Ecoland) on the development of enterprise-engineered smart industrial cities on Friday. Accordingly, LH and Ecoland plan to set up a joint venture and conduct a joint venture when the results of feasibility study on the Endurance Industries and Urban Projects are released.
The Enjong-Endustry industrial city is a project to build a smart city in Vietnam's capital city of Hanoi with a capacity of 30 million m2, about 1.5 times the size of the Bundang New Town. Industrial cities will be formed with seven industrial complexes, two city clusters (residential areas), high-tech clusters, and logistics and trade clusters. The project costs 1.2 trillion won.
LH signed a memorandum of understanding (MOU) with Viha .CO, a Vietnamese development company, in April last year to participate in the project. Ecoland, which signed the deal, is a special purpose corporation set up by Zico to push ahead with the business-intensive industrial city project.
According to bilateral agreements, LH will participate in three projects, including industrial zone 1 (2.7 million ㎡), high-tech cluster (1.6 million ㎡), and city cluster 1 (3.7 million ㎡), among industrial city areas. The total size of the project area was 8 million ㎡, and the specific project cost of LH was not decided.
The agreement also includes a provision to enable Korean private investors to participate in joint ventures. It is judged that if various Korean principals, including IT companies and financial investors, participate in the project, it could be more advantageous to construct a Korean smart city. The joint ventures will be discussed later on, including the capital, equity investment, and business structure.
The survey of the status for promoting the project (terrain survey, soil survey, hydrological survey, social environment survey, etc.) is carried out by Ecoland. Eco Land also provided the first step to implement the master plan and the costs required to approve the investment permit. Once the joint ventures are established, the costs will be calculated according to the shares of the joint ventures.
The Samsung Electronics plant and the LG Electronics Hypong plant are about 50 minutes away from the entertainment industrial city by car. LH expects the creation of smart industrial complexes that combine Korea's new city technologies will also provide a synergy effect with its neighboring Korean corporate plants.
The master plan and feasibility study will be released later this year. The LH will establish a joint venture as soon as the results are released, and will start compensation and construction next year.
It is the second time after Kuwait's " Abdullah New Town " that LH invests in the project by investing its own funds, breaking away from the existing method of signing a simple contract for urban development projects overseas. Abdullah's new city, which is three times larger than Bundang's new city (64.5 ㎢), will be jointly established and implemented by the LH and Kuwait governments when the project is proven to be feasible.
" We will not only expand the business model based on this investment, but also increase the number of Korean smart city exports, " said a LH official.