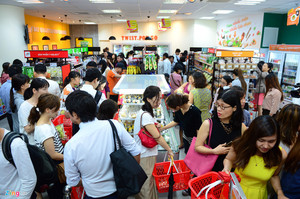 This segment includes Ministop, Circle K, Shop & Go in Singapore, and B's mart in Thailand in FamilyMart. Circle K is the largest number of stores in this segment. Many of the major customers in this contested area are tourists seeking drinks and snacks.

At the same time, there are a number of foreign convenience stores in Pasteur and Nguyen Trai streets, Truong Dinh, Nguyen Dinh Chieu, 5 and 6 districts, as well as backpackers.

Although convenience stores are prominent in locations where foreign customers are highly likely to use them, there seems to be a difference in using convenience stores for Vietnamese customers. Convenience store in five wards A woman who works near the competition area usually goes to a convenience store with her colleagues after lunch. At this time, it is a mini stop with a front space where the family mart in front of you is about 100m away. Buy drinks or sweets and enjoy talking in this space.

7-Eleven (Dallas, Texas, USA), a wholly-owned subsidiary of Seven & i Holdings Inc. (Chiyoda-ku, Tokyo), which opened its first store in June 2017, opened 100 stores in three years, But at this point it is only 18 and the target number is far below the target number. The Nguyen Thi Minh Khai store in District 3 has only 10 foreign visitors despite the noon, and there are only foreign tourists.

Because the company is nearby, Vietnamese women who use this restaurant do not have time for lunch, so they buy rice and noodles and spring rolls at convenience stores. However, the woman said that the kind of food is abundant and the price is between 25,000 and 49,000 VND, so even the simple food is not cheap enough to buy goods here.

GS Holdings Korea GS Retail's GS25 has opened 10 stores mainly in the city's first and third districts, three months after the first store opened. It plans to increase it from 10 years to 2500 stores. The company originally aimed to expand Korean taste and culture to consumers, but as with Seven-Eleven, it seems that only Vietnamese food is held by Vietnamese customers.

Market research According to company statistics, the number of convenience stores currently operating in Ho Chi Minh City is: ◇ Minisstop: about 120 ◇ Family Mart: 136 ◇ Shop & Go: more than 108 ◇ Circle K: 266. Each of the convenience stores is assuming a deficit for the first five years, but it is one of interest that it is a convenience store to remain in the market till the end of the battle.