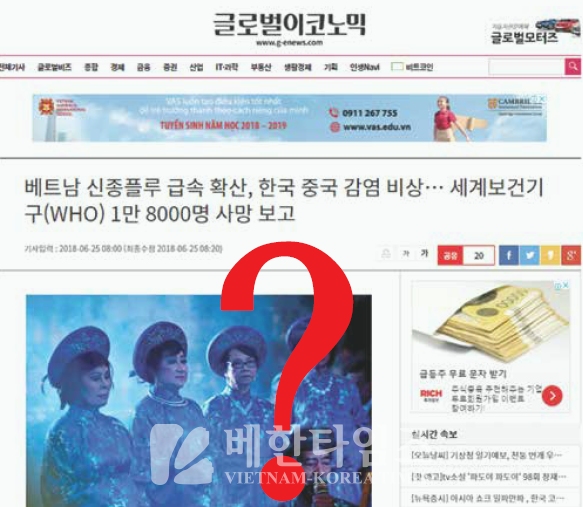 Hundreds of H1N1 flu patients?
An article titled 'Vietnam H1N1 Influenza and Emergence of Korea's China Infection' came up on the internet media of 'Global Economy' on the 25th.
According to this article, 'The Vietnamese health authorities announced on the 25th that hundreds of swine flu (A / H1N1) patients called swine flu occurred. Among them, more than 100 positive patients were diagnosed, and several of them had already died. "
However, there are hundreds of H1N1 flu patients everywhere in Vietnam and there is no indication that the life span has died. As of now, there are 40 officially registered H1N1 flu patients and 3 people are dead as of 28th. We contacted <Global Economy> via email to inquire about the source of the foreign country, but we did not hear the answer.
HANOI, Vietnam, Oct. 24 (Xinhuanet) - A total of 40 people have been diagnosed with H1N1 flu in Vietnam. Two deaths' articles. Yonhap News Agency has a correspondent in Vietnam, but the article was not a self-report, but a translation of Vietnamese news, a English-language newsletter of the Vietnamese state news agency.
Soon, more than 10 Korean media began to write news articles. Most of them were not the same. However, the articles of <Global Economy> were different. Hundreds of patients were the only H1N1 influenza pandemic, not 40, and the number of deaths was unclear.
The HCM City Preventive Health Center also confirmed that 40 people were confirmed for H1N1 flu, and many of them were completely recovered. This is the only known 'official'. The article in Global Economics, which is the source of the article, is likely to be an obvious omission.
Frequent foreign obsolete, why?
Foreign obsolescence occurs frequently. Unless you have a correspondent or correspondent in every country, you have no choice but to rely on local media. It is not easy to stay in Korea and check the facts of foreign articles. Sometimes the wrong article comes out as a misreading during the translation process.
However, the misreading of the Global Economy is simply a mystery. It was not a matter of translation error, and a day ago, many media, including Yonhap News, published related news.
It is likely that some Internet media are typical of the commonly used "abusing articles". It is a form that encourages readers to click on the article by exaggerating the article. The death toll has increased from 40 to hundreds of patients in Vietnam, and the death toll was two to 25, but said it was "life expectancy." He even added the subtitle: "The World Health Organization reported death to 18,000 people." So far, the number of patients who died of the H1N1 flu in the world is 18,000, and the fact that only a simple reference is attached to the title is intentional to stimulate through a large number.
Why is the Internet-raiding article 'fishing' so-called readers constantly being produced? The excitement is to increase the number of clicks and visitors by increasing the advertising revenue, and the basic responsibility of the media to inform the truth is subordinated to subordination. In particular, the distortions and exaggerations of foreign news articles are more serious in that they can be traced to foreign affairs.
Kim Seung-joo, a professor at the Graduate School of Information Security at Korea University, criticized "internet media that employ only a few employees to concentrate and distribute sensational and stimulating articles, while damaging the journalistic value of Internet media and manipulating public opinion" .