A 12 % drop in profits for three months will increase fund investment by 150 billion won in the forecast for short-term stock market adjustment. 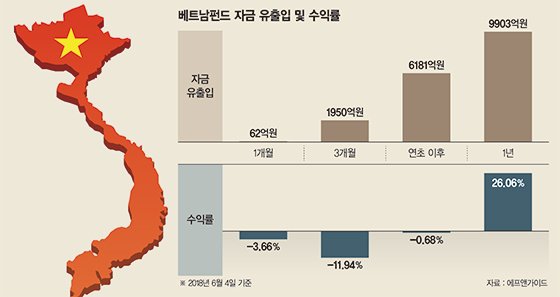 Although its profit rate is decreasing rapidly due to a sharp drop in its VNI Index in Vietnam, there is a huge amount of money flowing into Vietnamese funds.

According to financial information provider f and guide on the 5th, Vietnam funds posted a return rate of 0.68 percent (as of the 4th) since the beginning of this year. The latest month marked - 3.66 percent and three months - 11.94 percent. This is a poor performance compared to the 0.60 percent, 0.95 percent and - 1.94 percent returns for the entire foreign equity fund over the same period.

Although Vietnam Fund recorded 26.06 % of accumulated profit over the past year, it has been mired in slump due to the recent plunge in VN Index. The company's VNI index, which has risen sharply since last year, dropped to 931.75 on May 28 after hitting a high point (1204.33) on April 9 this year. In less than two months, it dropped 23 percent. The reason is that the burden of high taxation and the strong U.S. dollar have reduced investment appeal in emerging economies and the outflow of foreign funds.

However, despite the low profit margins, the inflow of funds into Vietnamese funds continues. Since the beginning of this year, 618.1 billion won has been injected into Vietnam funds. In the last three months, the company has also invested about 150 billion won (approx.)

Predictions that Vietnam's stock market will be adjusted for only a short period of time suggest that the fund is being concentrated even on a sluggish earnings ratio. Experts say that the short-term volatility of the Vietnamese stock market is expected to increase due to the emerging economies and the external environment, but that it is unlikely to turn into a downward trend. Given the Vietnamese government's willingness to expand its fiscal power and boost its stock market, it believes that a strategy to wait for the volatility to settle is effective.

" Since the beginning of the year, the Vietnamese stock market has soared, the PER has jumped 21 times since the beginning of the year, and the burden of balancing has been imposed, " said Chang Hang-jin, director of the retail marketing division of the stock market. " As VN Index fell more than 20 % after its high point in April and confirmed its bottom line, there will be a huge increase in earnings due to a rebound in the future. "

" The Vietnamese government's policy to overcome its fiscal deficit is continuing, " said Lee Chang-min, a researcher at KB Securities.