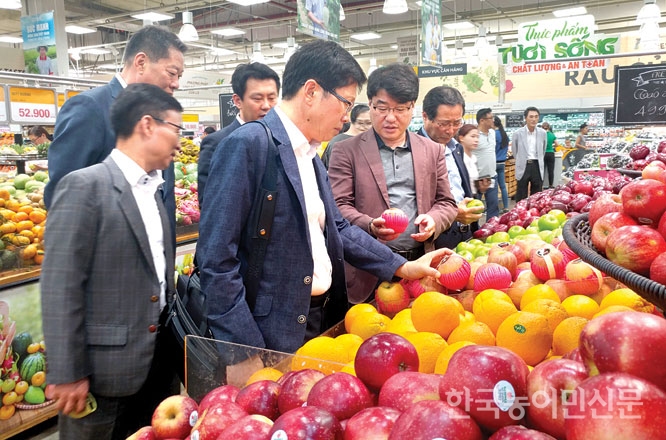 South Gyeongsang Province said the result of its efforts to develop overseas sales channels for agricultural products in Shanghai, China, and Ho Chi Minh City, Vietnam, from July 14 to 17.

After reviewing conditions of operation such as local consumer response and activities related to buyers, it discussed trends in Chinese agricultural and fisheries markets and ways to expand exports of agricultural products in South Gyeongsang Province.

In order to expand exports, representatives of antenna shop operations suggested that local agricultural products need to be exported to China's inland region, which is less competitive with Korean conglomerates.

The South Gyeongsang provincial government visited the Korea Food and Drug Administration and the Shanghai branch of the Cheongdo Revolution Village to introduce the products and discuss exports. It also held an export consultation meeting with three local buyers to sign an export deal worth $ 3.5 million for baby snacks, red ginseng products and cotton products.

It also examined the feasibility of setting up an overseas antenna shop that would serve as a base for exporting agricultural products to South Gyeongsang Province. By combining export possibilities and others, it is actively considering selecting the best place to open in second half of this year.

Vietnam is a huge market with a population of more than 96 million. Last year, South Gyeongsang Province agricultural products exported to Vietnam accounted for 29 million dollars, accounting for 2 percent of the country's agricultural exports.

In order to increase the proportion of exports to Vietnam and diversify its export items, the Korea Export Advisory Council in Ho Chi Minh City decided to export the apples of the Korea Agricultural Cooperative Federation by exporting the strawberries and the Ahn National Agricultural Cooperative Federation, while exporting energy drinks and other sources.